Stephen Jon on working with children in care…

Stephen Jon has been working with City Arts for a number of years. Between April 2013 and May 2014 he was involved in six of our major projects either as a performer or workshop leader, or both. When we work with an artist regularly we give them opportunities to use their skills in new and challenging situations, giving them the chance to test their limits and increase their experience. Last year, for the first time, Stephen worked with a group known as LAC’s, or Looked after Children; young people in residential or foster care.

Stephen describes himself as a ‘Mask Maker’; a term he believes has strong philosophical implications. The mask will disguise your emotions whilst allowing you to express yourself freely. “I’m fascinated with the mask because it has endless possibilities and contradictions, it continues to excite me.”

His work involves both visual arts and drama; two strands which, when combined, he believes can represent someone in their entirety. Visual elements, like the mask, describe a person’s outer being, what they present to the world. Drama lets you explore a character’s inner life; their feelings, thoughts and desires. “Even if it’s not explicit, an element of visual arts and drama comes into anything I do”

Our work with children in care developed out of Express Yourself. When consulted, a group of Looked after Children identified both drama and mask-making as things they’d liked to try. Stephen’s track record made him an obvious choice to run a series of workshops with this new group. 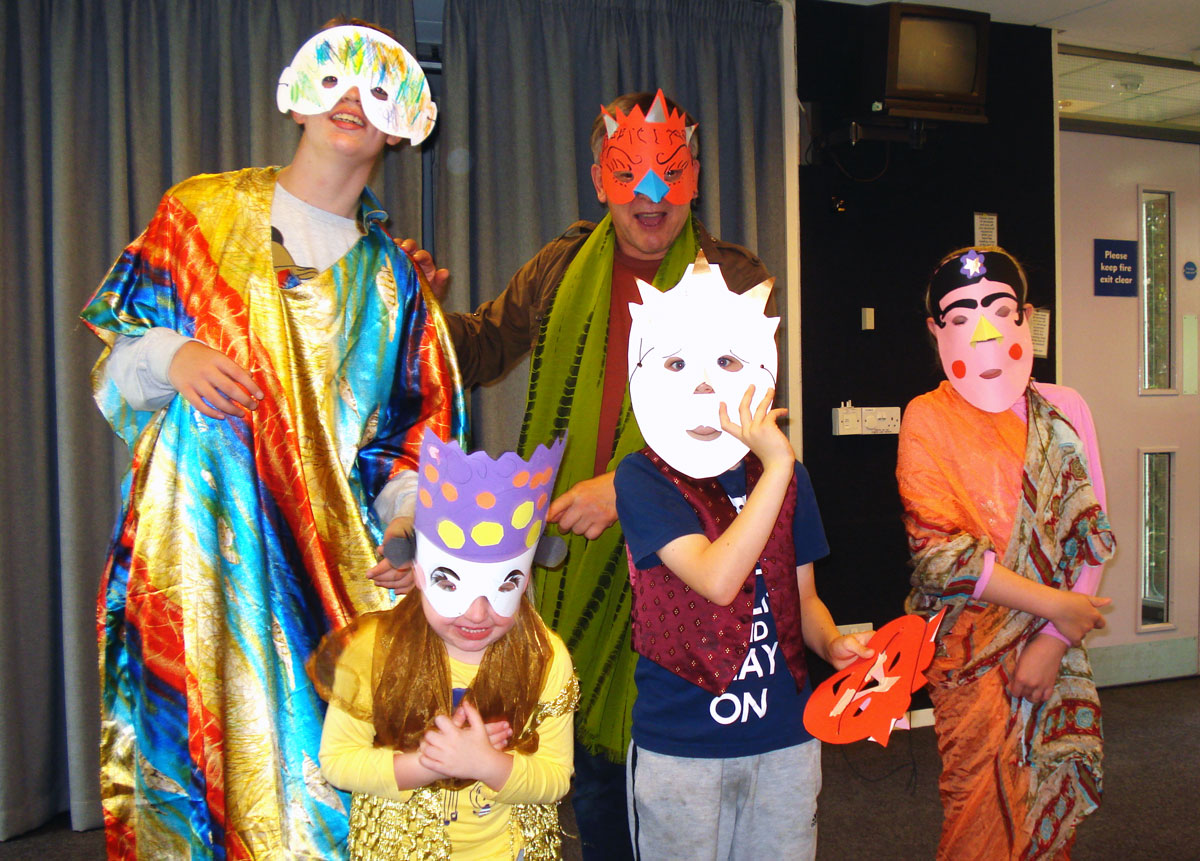 The nature of the project, and the participants, made the work a challenging ask for any artist. Ages ranged from five to fifteen, attendance was unreliable and a number of the young people were emotionally volatile. “Lots of unexpected things happened – in every session the unexpected happens – because you can’t foresee who is going to turn up on the day. The way children may respond is unexpected, they may be in one mood one day and a completely different mood the following day, you certainly have that in bucket-loads.”

Years of experience means Stephen has a lot draw on when the unexpected does occur.

“It think that’s part of the strength of my arts practice, but also my age and experience – I’m a bit grandfatherly, I know that’s part of my role, I’m not a teacher, I’m not a parent, I’m this other, older person who’s warm & providing something fun. I play that role, that’s a mask I wear.”

Over the course of the project there were many successes. One young girl suffered from selective mutism, an anxiety disorder that prevents children speaking in certain social situations. Stephen’s sympathetic support helped her through her anxiety. “She was naturally very able – artistically – she did lots of painting and I encouraged her, she was enjoying it, she was having fun, by the end of the week she was chattering away to me.”

We arranged for Stephen to work alongside professional therapist Sally Falkner during the sessions. This was very rewarding: Stephen feels that Sally’s academic approach complements his work and experience. “It gives a context to my practice… Sally is able to articulate some of the things I do naturally – almost unthinkingly – like the way I respond to a situation as it emerges.”

Whilst Stephen is well versed in the intellectual theory that supports his work – he has studied and is accredited in drama therapy – he believes that academic desire to name things can sometimes get in the way. “Having an academic working in parallel with me transfers the responsibility for that contextualising. It means I can really focus on what I’m doing & what I’m good at without trying to put fancy word to it, she can do that and she does it very well, far better than I would do. It liberates me so I can continue to work and develop my own instinctual, deeper knowledge.”

Connecting and communicating with the organisations that look after these vulnerable young people was, in Stephen’s words, “a monstrous nightmare”. Still, the project was a great success. He hopes to persist. “I really like it… I would love to develop the work and have been in conversation with Sally.”

PoGo: Meet the young poets who will represent Nottingham on our new, international, poetry app

How Scrambles Photography Group are combating isolation through photography