Recently, City Arts has teamed up with organisations across the EU. Together we are part of a new project called ‘Heritage Hunters’. It is funded by Erasmus+.

It began with a trip to the Republic of Moldova in the autumn of 2017. Twenty-nine ‘youth leaders’ from across Europe came together to share their different cultural heritages. A ‘Youth Leader’ is someone that can influence the way young people learn about art, culture and heritage. The group included people from the Denmark, Armenia, Romania, Turkey, Moldova, Azerbaijan and Ukraine.

Meridith Dickin and Mary Strickson travelled to represent the UK. They are both members of our Young Producers group. During the trip, they were introduced to Moldova’s capital city Chișinău. They discovered the towns of Orhei, Orheiul Vechi, Bahrinesti and Vadul lui Voda. They enjoyed a wide variety of activities that revealed Moldova’s cultural heritage.

Below, Mary and Meridith, share what they learned from their visit, about both Moldova and themselves…

I don’t engage with my own heritage.

“That’s probably an exaggeration; I obviously know SOMETHING about my heritage. I probably engaging in it without realising, but it’s likely I have done a bit of picking and choosing in terms of what parts I pay attention to.

Moldovans are much more in touch with their heritage than most people I know, some of young women in our group all had made traditional garments and hand embroidered them, I got the feeling that was something most people did.” 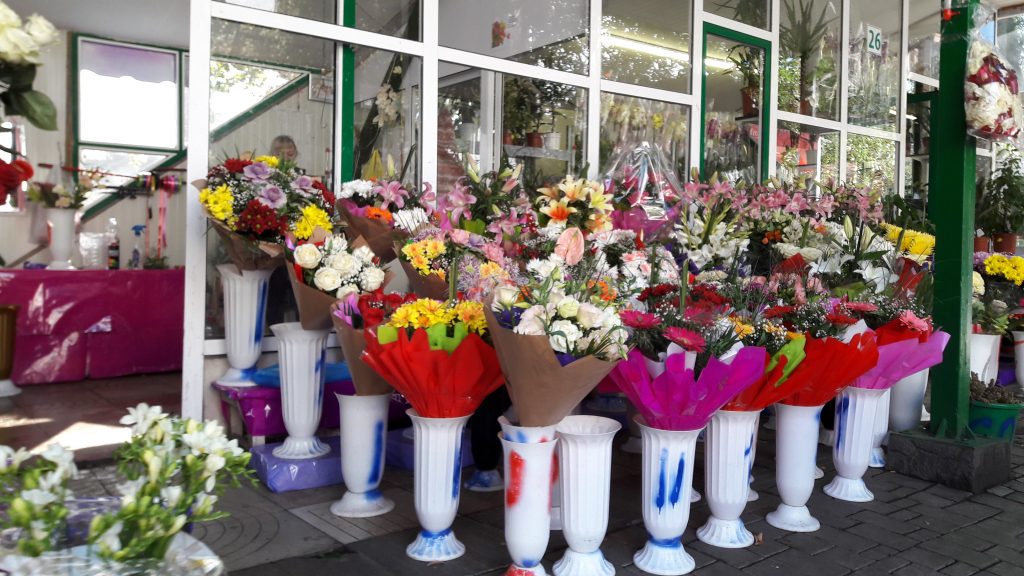 Moldova has great wine and flower

“One of the things Moldova is famous for is its wine; many families make their own wine, which is actually something I’ve tried to do myself with some small success.”

“I think it’s fair to say we all really enjoyed the trip to the wine festival.  We also got to see performers and dancers on the big stage and visit street markets. We did a walking tour of Chisinau’s monuments and heritage which allowed for great photo opportunities.”

“We were sort of politely warned not to go taking too many pictures, for example when we were being driven along we spotted this street that was just… flowers. Like everywhere – flowers! The whole length of it was a giant beautiful row of stalls selling flowers, apparently that’s a big thing in Moldova, giving people flowers.” 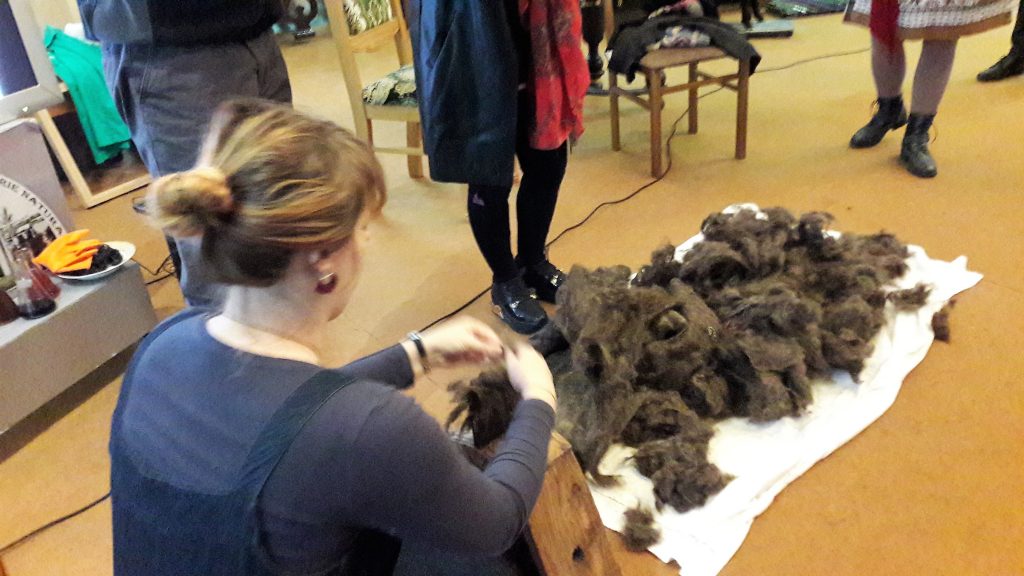 We have more in common than I thought

“We visited this museum where we were given a talk by professors and museum representatives dressed in traditional costume. We were told the entire process from shearing the sheep to turning their coats into wool through felting right through to crocheting and knitting, the garments and carpets that were created by this. Each step of the process was demonstrated by the speaker, plus it was fully interactive and accessible where we could get involved in having a go at each stage whether that be staining and colouring the wool or spinning the yarn. I got to crochet a small square which I have kept as a souvenir!”

“It was nice to learn that they still treasure this way of making fabric and garments. I have studied the relationship we have with fabrics and spent a lot of time myself working with fabrics and trying to make and manipulate them in different ways. So during this workshop It was so cool to see that some processes are the same all around the world, it made me feel like our heritage was all connected somehow.” 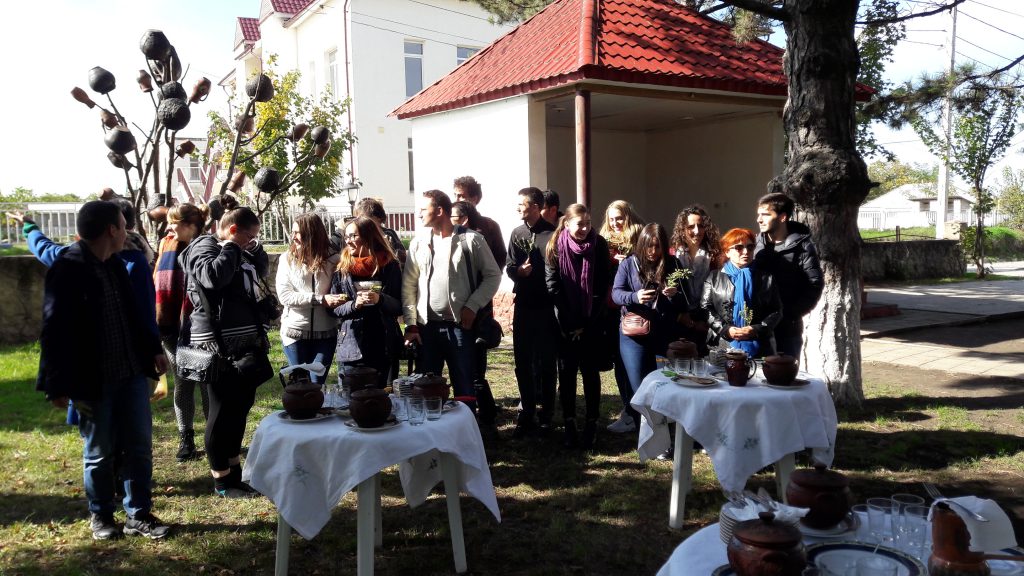 Moldova will give you a warm welcome

“Moldovans are SO GENEROUS. This was particularly evident on our stay in Bahrinesti. Upon arrival we were presented with sprigs of basil and then we were treated different dishes, cooked in a large outdoor oven by one of the women from the village. The locals in the village were really friendly and welcomed us. Six of us stayed with a wonderful woman called Doamna Eleina.”

“I absolutely loved the stay at a local person’s home. It was challenging due to staying in a completely agricultural area, with little artificial light, no electric or gas heating and outside facilities but it was an authentic experience and the best part of the whole trip. I’ve always lived in a city and never been to the country very much. I’d never seen a clear sky so full of stars, so bright, so calming and peaceful. It was so quiet and beautiful. To be welcomed into someone’s home which was so interesting and comforting, to get to play games together and interact despite language barriers and to have our fortune read! Our host was so lovely offering us plenty of snacks, drinks and being so accommodating.” 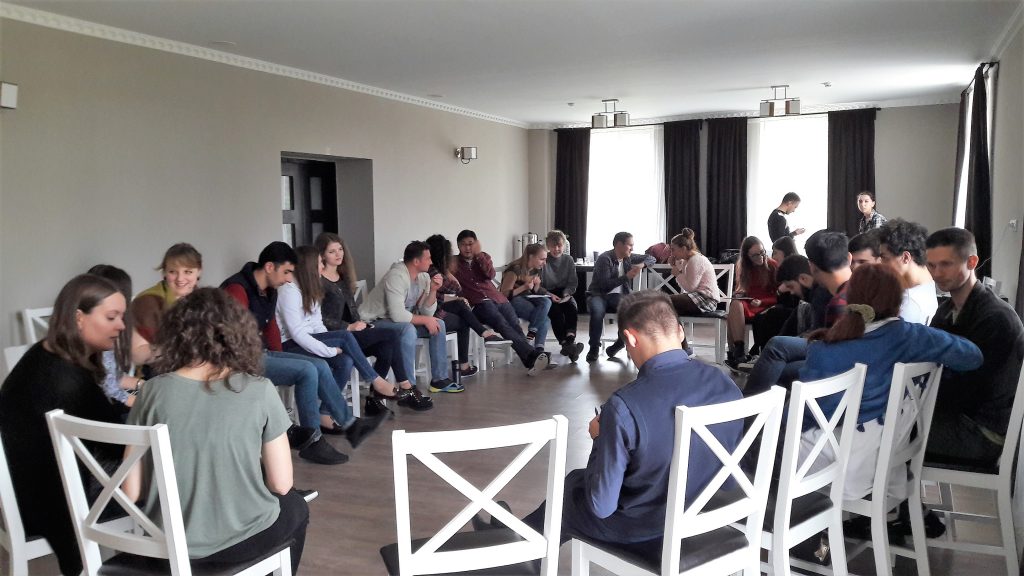 The language barrier isn’t a problem, you can play cards with anyone!

“So the language barrier was… mostly ok. Thankfully the wonderful people we met spoke very good English and I was so relieved about that because almost anywhere you go in the world, people will speak English, but in England we don’t make much effort to learn the beautiful languages of other people, which is incredibly sad. So in general we all communicated quite well, and we bonded over card games. It was so cool to teach each other new card games. We also played card games with the woman who hosted us on our cultural stay, she didn’t speak a word of English and we didn’t speak a word of Moldovan but still we managed to all have fun together.” 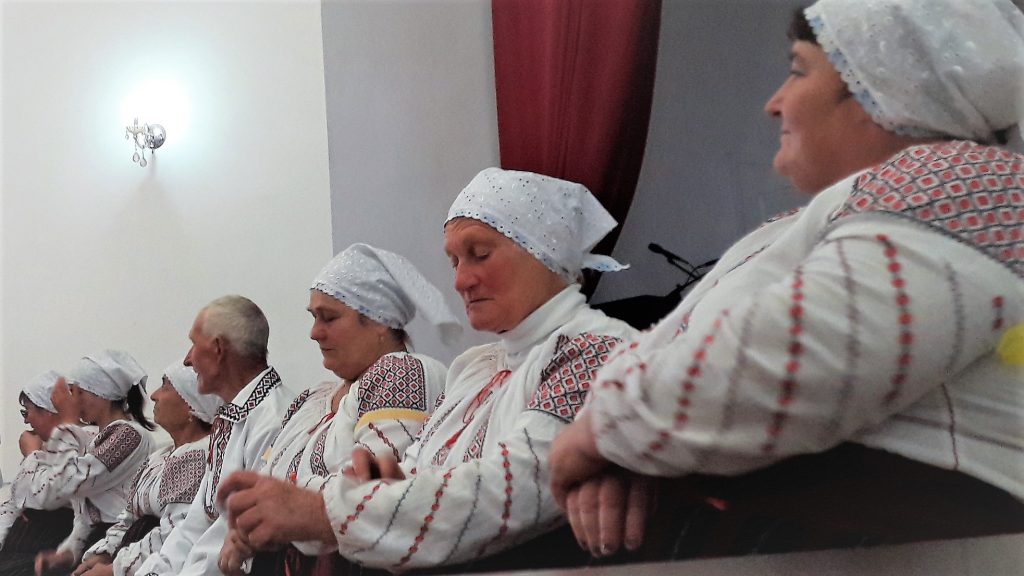 “This let us gain insights into all the different countries involved within the exchange. Each country gave a talk about their own culture and heritage, offering snacks and drinks representing their home. I learnt so much and best of all got to taste first hand an essence of their local environment and culture.

Held at the town hall in Bahrinesti we were treated to acapella singing, accordion playing, and dancing by locals and ourselves! It was a really fun, relaxed evening and really helped us connect with the real people of Moldova, their actual working lives and experiences. It also allowed us to intermingle with each other and learn first-hand about Moldova’s culture and friendliness.” 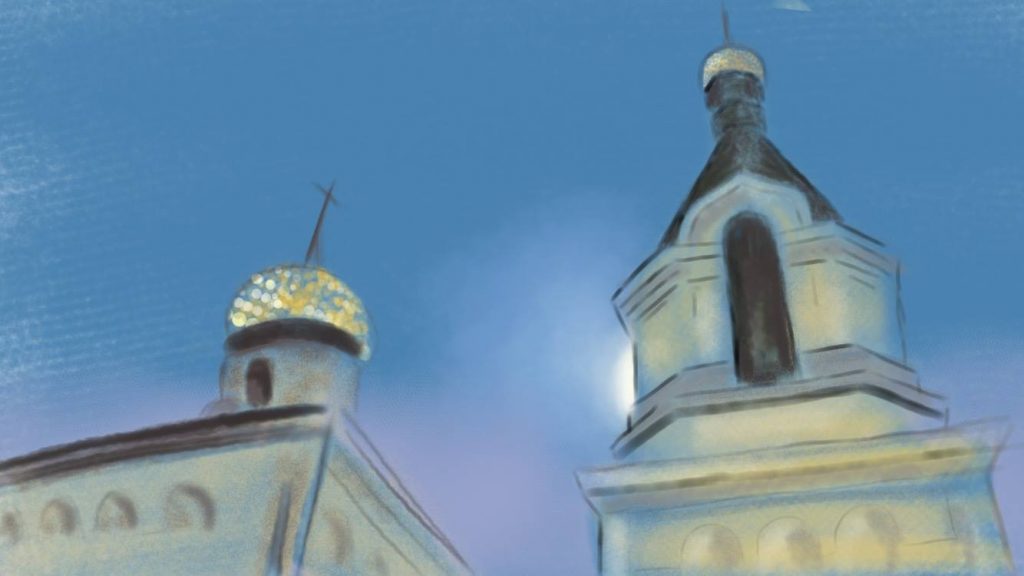 The views of Orheiul Vechi are stunning

“All I can say is… wow. Breath-taking. Beautiful. Such spectacular views. I’ve honestly never seen anything like it. To be stood so close to the edge of a cliff and to see such amazing natural surroundings. I’ve never done that before. I would’ve never have attempted to have climbed up there, but I’m so glad I did. The view at the top was sensational and worth every minute. I tried so hard to capture it in a photograph but it’s impossible to do it justice without actually being there. Amazing.”

We learned some great new ideas

“Near the end of the week we pooled together our ideas and worked in groups to explore possibilities beyond this exchange and ideas that funding could be used for. This allowed us all a chance to be creative and imaginative, to pool our ideas and resources together and to truly achieve an international exchange of ideas and creative thinking.”

“One of the things I learnt was a really cool activity that I hope to implement one day with workshops I run. On the last day we wrote everyone’s name on an envelope and stuck them to a wall. The idea was that we could fill each other’s envelopes with comments, memories, well-wishes, etc. and that we could each take our own envelope and read it on the plane home. So on the plane I was reading all my notes and I thought this was the BEST way to end the trip, I have kept them and I will treasure them.” 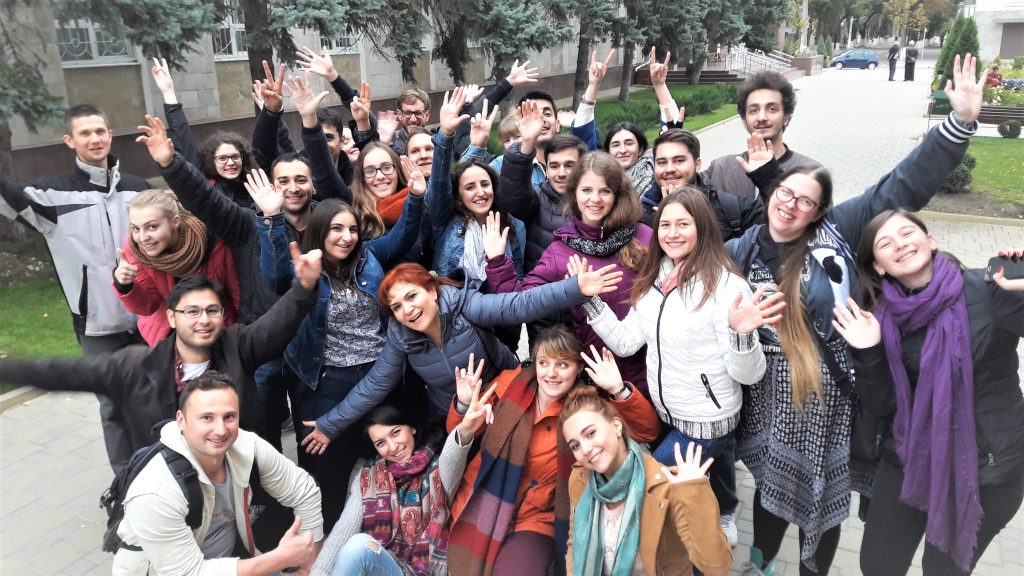 We need to travel, explore and connect

“The most important thing this trip taught us is that we should all be international and interculturally connected. We need to work together, to share experiences, heritage and culture. To share our ideas, our knowledge and our beliefs to gain wider understanding and acceptance. To open our minds to new possibilities and experiences, different ways of thinking and doing, to learn from each other the best way to work with young people and communities. It’s so important to be international, to be multicultural and to be welcoming to everyone, always. To participate, celebrate and work together to enhance our sharing of culture and heritage, to lead the way in how the world should be and the importance of diversity within our lives, society and the arts.”

It can be hard to promote culture to young people

“A lot of our cultural heritage, no matter where we are from, is going to be lost by the lack of communication between old and young. On the last day we were trying to plan hypothetical activities about how we could promote cultural heritage in our own countries, and we were reflecting on our own heritage. One of the participants described one of the traditional things they make during celebrations in their home country, she said they learn how to make it from their grandmas usually. I thought that was great, it’s exactly how things should be, and the great thing about having people at opposite ends of the age spectrum interacting is that you’ll get such a fabulous blending of old and new, old treasured traditions being learnt and adapted by the new innovative generations. But it’s hard to make people interested in things that they’re not interested in, first we need to foster an atmosphere of respect and intrigue, to make people actually want to learn from each other and value their heritage. So what do I engage with from my own heritage? This whole trip made me question that, and made me inspired to see how I could help other young people explore what heritage means to them.”

City Arts (Nottingham) to receive £26,000 from third round of the Government’s Culture Recovery Fund